Ten years.  I’ve been his mom for ten years.

Ten years ago I became the mother of a boy.

Ten years ago I became the mother of siblings.

Ten years ago our family grew from three to four.

Ten years ago I learned to love the phrase “momma’s boy”.

Today I see a boy who is learning so much from his father about becoming a man, and I both love it and hate it.  He’s too young to learn about being a man.  Isn’t he?  Oh but I’m thankful for the role models that he has – his dad, his … Read the rest

Eli’s violence towards his sisters has been increasing in frequency as of late, so today I sat him down with his Bible for a little lesson.  This is not a lesson I can take credit for, I learned it from my friend Sheri and am thankful for it!

I opened his Bible to Galatians 5:22 and had him read the Fruits of the Spirit.  I then wrote those on a piece of paper and had him write what he thinks each one means.  Here is what he came up with:

Joy – having fun
Patience – waiting
Goodness – being … Read the rest

Eli is rebelling against boundaries right now with full force.  Of course I expect him to do this, but that doesn’t mean it’s fun to live with.  This post is mostly a picture reminder to myself of the sweet boy I’ve gotten to parent over the past almost eight years, and that I will make it through this… as I have everything else.

In looking through my recent posts, I noticed I’ve been writing a lot about Grace and Ada.  But what about the boy?  Surely we don’t want to leave him out!

Eli is a talker.  Lately he likes to play the Wii (Lego Star Wars or Mario Brothers mostly) andcomment on what’s happening.  On everything that’s happening.

Eli is in 2nd Grade.  Our biggest concern with him is that he struggles with reading.  Thankfully, they know this and have put him in a reading group to get him the extra help he needs.  I don’t LIKE that he needs extra help, but I DO like that they will do what is necessary to get him to where he needs to be with this.  I have already noticed a big improvement.  His teacher also said he struggles with focusing (Really? ELI?)  So he doesn’t have the grades he SHOULD have because he doesn’t always start his work right … Read the rest

It’s no secret that I struggle with Eli and his outbursts towards his sisters.  One day last week when I was in carpool line, I pulled up to find him standing right next to the teacher.  Uh-oh.  She informs me that he punched Grace.  Again.  So they get in the car and he immediately asks me what his consequence will be.  I told him I didn’t know yet.  He asked if it would be the Wii.  I decided no, because we have a deal.  If he gets a green (in our day it would be like not getting your … Read the rest 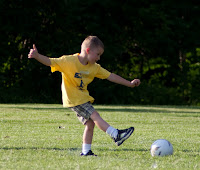 Eli has been in three different soccer programs over the past couple years, and they’ve all been learning experiences for us to say the least.  Our exposure to soccer parents has been… interesting.  As Eli gets older, we notice more and more the varying ability from one boy to the next.  The atmosphere at the 4-6 year old game was much different than at the 6-8 year old game.  At this morning’s game, Chad and I were discussing how important it is to remember that Eli is only six.  He’s SIX.  He needs a lot of grace at soccer practices … Read the rest